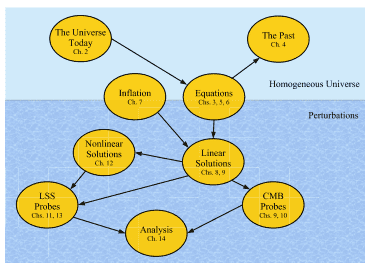 The Standard Model of particle physics describes the known fundamental particles in nature and how they interact. The particles can be divided into two classes: spin-1/2 fermions and integer-spin bosons.

Fermions are the constituents of matter: the quarks, out of which baryons are built, and the leptons such as electrons and neutrinos. There are three generations with two quarks each for a total of six quarks, denoted $u, d ; s, c ; b, t$. Each generation of quarks is associated with a pair of leptons. For example, the $u, d$ pair is associated with the electron and its neutrino: $e^{-}, v_{e}$. The other lepton pairs are $\mu^{-}, v_{\mu}$ and $\tau^{-}, v_{\tau}$. The vast majority of matter in the universe is made up of the first generation, with the exception of neutrinos, which are mixed between the different generations. Unlike leptons, quarks do not exist on their own, but they form bound states under the strong interaction. Baryons, the most important ones being the proton and neutron, are made out of three quarks. Mesons are composed of a quark-antiquark pair.

Bosons contain the spin-1 (vector) force carriers, the most famous of which is the photon which mediates the electromagnetic force. There are eight gluons (massless, like the photon) that mediate the strong force. The weak force, responsible for example for neutron decay, is mediated by three massive bosons: the $Z, W^{+}$and $W^{-}$. These force mediators are complemented with the spin-0 (scalar) Higgs boson. The Higgs couples to all massive fermions as well as the $W$ and $Z$ bosons. This coupling gives mass to the particles through the Higgs’ homogeneous background field value.

The Standard Model has remained largely intact since its inception, gaining more and more experimental verification every year. However, neutrino masses are now a confirmed piece of physics beyond the Standard Model. Moreover, the evidence cosmologists have uncovered-that there is a need for dark matter, dark energy, and new physics leading to inflation-clearly shows that the Standard Model is not the final word in particle physics.

We are now ready to summarize the concordance model of cosmology: a Euclidean universe that is dominated today by non-baryonic cold dark matter (CDM) and a cosmological constant, with initial perturbations generated by inflation in the very early universe. Since all measurements are currently consistent with dark energy being a cosmological constant $\Lambda$, this concordance model of cosmology has become known as (flat) $\Lambda$ CDM. It is worth noting that none of these ingredients are part of the Standard Model of particle physics (Box 1.1)! Let us thus briefly discuss the status of these three ingredients.

CDM: The “Cold” part of this moniker comes from requiring the dark matter particles to be able to clump efficiently in the early universe. If they are hot instead, i.e., have large velocities, structure will not form at the appropriate levels; among others, this excludes the known neutrinos from being dark matter candidates. We have argued that BBN and the CMB imply the existence of non-baryonic matter. However, observations of structure in the universe independently lead to the conclusion that there must be dark matter. The inhomogeneities expected in a model without dark matter are far too small. In Ch. 8, we will come to understand the reason why a baryon-only universe would be so smooth. Moreover, dark matter is a familiar concept to astronomers; the first suggestion was put forth by Zwicky (1933), based on galaxy velocities within clusters. Ample evidence also comes from the rotation curves of galaxies. Indeed, a mismatch between the matter inferred from gravity and that which we can see in the form of baryons exists on all galactic and extragalactic scales, and it always points toward roughly 5 times more dark matter than baryons.

What is this new form of matter? And how did it form in the early universe? So far, we know only its overall abundance and the fact that it must be cold. The most popular idea currently is that the dark matter consists of elementary particles produced during early moments of the Big Bang. In Ch. 4, we will explore this possibility in detail, arguing that dark matter may have been produced when the temperature of the universe was of order hundreds of $\mathrm{GeV} / k_{\mathrm{B}}$. As we will see, the hypothesis that dark matter consists of fundamental relics from the early universe is being rigorously tested experimentally.

Cosmological constant: Evidence from a variety of sources, but most famously from distant supernovae (starting with Riess et al., 1998; Perlmutter et al., 1999) suggests that there must be energy, dark energy, besides ordinary matter and radiation. Unlike dark matter, this component does not cluster strongly. We already discussed the possibility that this new form of energy remains constant with time, i.e., acts as a cosmological constant, a possibility first introduced (and later abandoned) by Einstein. Cosmologists have explored other forms though, many of which behave quite differently from the cosmological constant. We will see more of this in Sect. 2.4.6.

As a way of summarizing the features of an expanding universe that we have outlined above and that we will explore in great detail in the coming chapters, let us construct a time line. We can equivalently characterize any epoch in the universe by the time since the Big Bang; by the value of the scale factor at that time; by the redshift freely traveling photons have experienced from then until today or by the temperature of the cosmic background radiation. For example, today, $t \simeq 13.7$ billion years; $a=1 ; z=0$; and $T=2.73 \mathrm{~K}=2.35 \times 10^{-4} \mathrm{eV} / k_{B}$. Fig. $1.11$ shows a time line of the universe using both time and temperature as markers. The milestones indicated on the time line range from those that involve known physics (nucleosynthesis and the CMB) to those that go beyond the Standard Model of particle physics (inflation and dark energy).

The time line in Fig. $1.11$ shows the dominant component of the universe at various times. We do not know what dominated the energy budget of the universe at very early times after the end of inflation. We do know, however, that the universe was dominated by radiation at the latest by the time BBN occurred. Eventually, since the energy of a relativistic particle falls as $1 / a$ while that of a nonrelativistic particle remains constant at $m$, matter overtook radiation. At relatively recent times, the universe has become dominated not by matter, but by dark energy, whose density remains approximately constant with time.
The classical results in cosmology can be understood in the context of a smooth universe. Light elements formed when the universe was several minutes old, and the CMB decoupled from matter at a temperature of order $k_{\mathrm{B}} T \sim 1 / 4 \mathrm{eV}$, when the universe was 380,000 years old. Heavy elementary particles may make up the dark matter in the universe; if they do, their abundance was fixed at very high temperatures of order $k_{\mathrm{B}} T \sim$ $100 \mathrm{GeV}$ or higher.

In this book, we will be mostly interested in the perturbations around the smooth universe. At the beginning of the time line, we allow for a brief period of inflation, during which primordial perturbations were produced. These small perturbations began to grow when the universe became dominated by matter. The dark matter grew more and more clumpy, simply because of the attractive nature of gravity. An overdensity of dark matter of 1 part in 1000 when the temperature was $1 \mathrm{eV}$ grew to 1 part in 100 by the time the temperature dropped to $0.1 \mathrm{eV}$. Eventually, at relatively recent times, perturbations in the matter ceased to be small; they became the nonlinear structure we see today. The observed anisotropies in the CMB tell us what the universe looked like when perturbations were very small, so they are a wonderful probe of the latter. Moreover, the CMB anisotropies provide a precise characterization of the initial conditions needed for detailed analytic and numerical studies of the growth of structure. To give you an idea of the road ahead, Fig. $1.12$ charts the way through the various ingredients going into this calculation that we will get to know in subsequent chapters of the book.

Some of the elements in the time line we have discussed may well be incorrect. However, since most of these ideas are testable, the data from the first half of the 21st century will tell us which parts of the time line are correct and which need to be discarded. This in itself seems more than sufficient reason to study the CMB and large-scale structure.